HomeArticlesMeeting Families From All Over the World

Meeting Families From All Over the World

The fifth day of our pilgrimage and the fourth day of the World Meeting of Families has come to a close.  Each day was filled with blessings (for a recap, see the daily articles), all according to God’s providence.  On Friday, the last day of the #WMF2015, we were so tired and the vendor area was closed down by the Secret Service for security reasons, and we barely made it to morning mass and we sat very far off to the side because those were the only seats left somewhat close to the front.  Again, we were tired, so we were there and we participated in the mass to the best of our abilities.  I was also a little distracted working on an item for work that had to be taken care of in the morning.

Despite all these distractions, a lady sitting in front of us from Brazil wanted a picture of our family because we were the largest family she had ever seen.  Another family from Brazil was with her and they began speaking with us, despite the language barrier, we go to know each other and took many pictures of our two families.  We were even invited to come to Brazil and stay with them.  Through this interaction, our tiredness faded away as we asked questions about their culture and they asked about ours.  Not only were the parents visiting, but so were the kids.  It was a sight to see, we must have visited for over 30 minutes.

The Guinness Book of World Records

Later in the morning, we stopped by a project that invited

all attendees of the WMF2015 to break a Guinness Book of World Records, record for the most participants in a paint by number project.  So at least 4 members of our family are now in the official record books for something.  While I do hope that this is not our family’s only claim to fame, it is still pretty cool nonetheless.

While Denae and I and our young adult children attended the main sessions of #WMF2015, our younger children were at the Youth Congress.

The YC could be described most accurately as a Vacation Bible School on a grand scale.  There were so Bishops, priests, seminarians, and religious sisters leading the activities, there was live music and entertaining speakers.  The YC gave parents the opportunity to fully engage their family in the World Meeting of Families.  We had the freedom to choose when to utilize the YC and when to do activities as a family.  It was a great balance and it was also where families had a chance to meet other families who attended the conference together.

A Beautiful Ending coupled with Anticipation 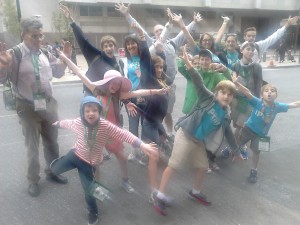 We ended the day by meeting a very nice family from Ireland, our kids hit is off so well that we decided to have lunch with them (Italian Food).  After spending several hours with this family visiting and learning about each other’s cultures and how we try to heroically live out our Catholic faith within our family life, we said our goodbyes and headed out to make our way back to our respective lodgings.

We visited the home of Betsy Ross in Philadelphia and took the PATCO (subway) back to Cherry Hill.  I think the train was the highlight of Joseph’s day and Betsy Ross was Therese’s. As we walked the almost empty streets of Philadelphia, there was a great sense of 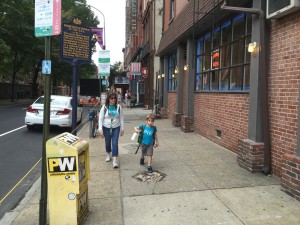 anticipation, anticipation that something big was about to happen.  I have never been to a large event like this, where a city is shut

down for a visiting dignitary, we have been to Rome to visit the Vatican and attend an audience with the Pope, but this is very different.  Everyone is focused on a single event, one that will last for 2 days and affects every aspect of life in this large US city.  For a moment, the world revolves around the leader of the Catholic Church.  Pope Francis didn’t ask for this, the diocese of Philadelphia didn’t ask for it, but this is how the city and indeed our country responded to the visit of the Vicar of Christ on earth.

We still haven’t left our hotel today to head into the city center, but I am excited about it and I think the kids are too.
We really don’t know what to expect, and that is really part of the Pilgrimage.  We are on a journey, the journey of life and we just don’t know what will happen, we can plan and plan and plan, and still life will throw us a curve ball (like my Dad’s illness and my father in law’s suffering and death earlier this year).  So we press on, trusting in God’s providence and doing our best to be ready for what lies ahead.

And today is my daughter’s 12th birthday, so we celebrated last night with a Daddy/Daughter date. Happy Birthday Therese!

Read the whole series on our Pilgrimage to the World Meeting of Families here.